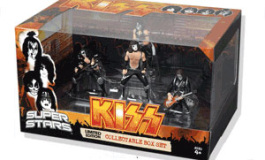 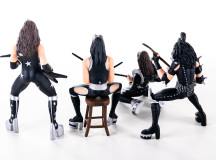 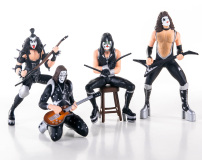 Four "highly detailed" 3 1/2 inch figures of the band in ALIVE! costumes with instruments says the packaging but if you look at the Catman makeup it looks a bit, er, crap. Sold in two differently packaged boxsets (yet the figures remained the same). And individually twice. Once at the time of release and then in revised package art featuring the 2010 tour line-up. A German version also exists with an altered logo

Thanks to George Navarro for the extra pics!

Add to Cart
How's your German? Watch this...